Welcome to the webshop of ESstevia
At last the time has come ... A new and responsible sweetener on the Dutch market! Steviol glycosides extracted from the South American plant stevia may be used as a tabletop sweetener. ESstevia offers its "sweeteners of the future" to natural origin and very high quality. Steviol glycosides contain no sugar, no calories, no carbs and do not affect blood sugar levels. This makes it a very suitable sweetener for diabetics. Even people who want to lose weight like carefree use steviol glycosides. Deliciously sweet but without the adverse effects.

ESstevia delivers steviol glycosides 100% pure in powder form, in liquid and lozenges, the so-called 'softly'. Liquid is convenient to use in cold and hot drinks such as coffee, tea, yogurt but also in smoothies or jam. The sweetener for hot drinks. To bake with steviol glycosides is GrooVia crystal. It looks like sugar and even a crystal. Pure powder is amazing sweet (about 300 times sweeter than sugar) and suitable for sweetening hot and cold beverages and for baking and cooking.
Besides these delicious sweet products ESstevia still delivers plenty of other stevia products like toothpaste and stevia seeds.

A small selection from our range.
For all products just look at our webshop 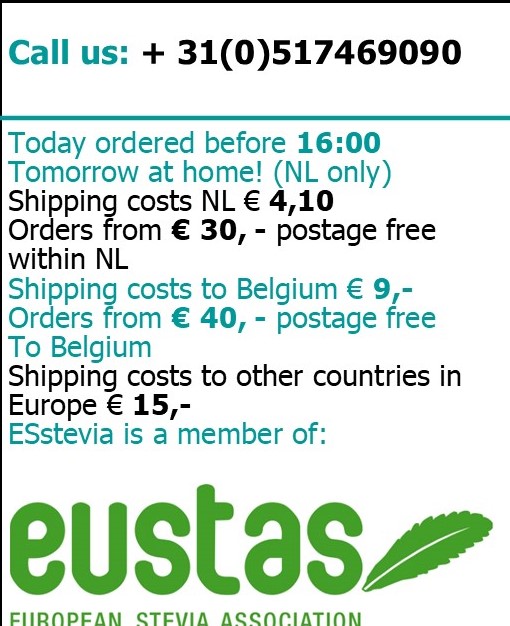